My failed encounter with the first feminist restaurant in America, with a short history of Mother Courage Restaurant (1972-1977) 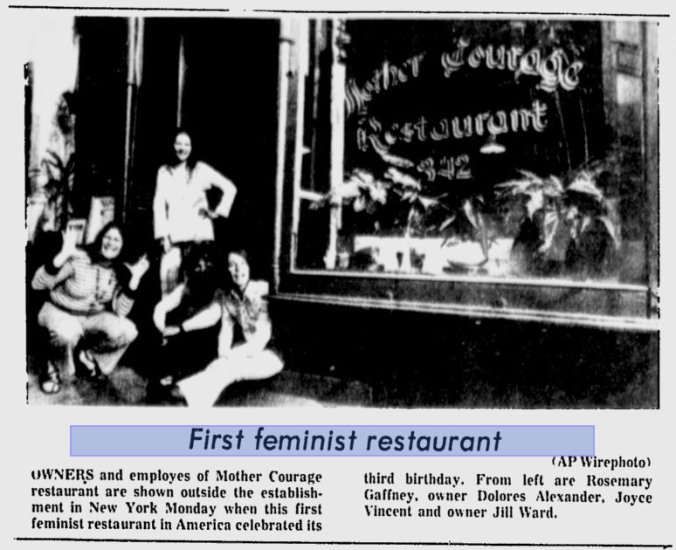 It was the days around New Year’s Eve 1977-1978, in New York City. With E., who had just flown in from Italy, we decided to dine at a restaurant whose magazine listing said “for feminists and their friends” (and we are friends, aren’t we?), where conversation bounces from table to table and is more interesting than food (well, you cannot have it all). The address was W. 11th Street, in the West Village. The name, Mother Courage. We ventured out into a thick, romantic snow storm, couldn’t see the tip of my nose, and eventually we found a locked door, a dark street window and a hand-written sign, “Sorry, folks, I just can’t do it anymore.”

Mother Courage had given up.

Last time I searched the internet for Mother Courage, a few years back, almost nothing came up under the entry “restaurant.” Now there is enough stuff to piece together a story. And the story runs like this. Mother Courage was the first feminist restaurant in New York and in the United States. It opened in the spring of 1972 and closed in 1977 – not long before, I guess, our unsuccessful visit to its premises. It was an inspiration for a small group of similar venues, in those years of militant inventions and creativity: Bread & Roses in Cambridge, Mass.; Brick Hut Café in Berkeley; Lysistrata in Madison, Wis.; Susan B.’s in Chicago. They were part and parcel of the women’s movement. And places where a woman could dine alone without feeling ill at ease or being harassed.

Founders and proprietors were Dolores Alexander and her companion Jill Ward. Alexander was a well-known figure in New York feminism. She had been the first national executive director of NOW, the National Organization for Women. She had left her office because of her criticism of the anti-lesbian attitude then prevailing within the organization (a “lesbian purge”? – this is a definition I encountered about the incident). Alexander joined the New York Radical Feminists and then created Women Against Pornography, a cause not shared by all the women in the movement. It seems that the restaurant was one of the few places in town where activists belonging to different factions could feel confortable, meet in peace, and even hold formal committee meetings.

The restaurant also hosted art shows, at least one of them, a controversial lesbian art show. This is the lesbian collective’s version of the affair: “In June, 1976, we had a group show at Mother Courage Restaurant. A day after the show opened, the restaurant called Flavia [Rando], and told her they found her semi-abstract painting of a woman’s genitals ‘offensive and in poor taste,’ and demanded that she take it down. Our group was torn between taking down all our work or making some compromise. We finally removed the ‘offending’ painting and put up a statement describing the painting and what had taken place and explaining Flavia’s artistic intentions in creating the work. We allowed this experience to have a destructive effect on the group…”

Work at the restaurant was hard, demanding, with the usual problems of a small business managed by people of good will but unfamiliar with actual bookkeeping and, in this particular case, cooking. There were additional problems too, specific to the venue. Women were stingy tippers and, in certain occasions, the management had to impose a 15% service charge. Male patrons were accepted, but they had to keep their place. Wine was poured for the woman to sample, not to the man, a departure from custom in other restaurants at the time. And what about the check? Well, the bill was put exactly in the middle between the tablemates – let the choice be theirs.

Of the restaurant and her life before and after it, Alexander (her divorced husband surname; she was born Dolores DeCarlo in an Italian working-class neighborhood in Newark, New Jersey) gives a personal account. She does it in a couple of interviews taken by Kelly Anderson for the Smith College “Voices of Feminism Oral History Project.” The transcript is here.

So, what did it mean to Alexander a “feminist” restaurant? “Well, a woman’s space. There was no such thing…. There was Schrafft’s, the Tea Rooms…, that kind of thing. But we didn’t want to be a tea room. We wanted to be a space for strong, independent women who would be hopefully involved in the women’s movement, and that did happen. After a while,women came from all over the world. They knew the name Mother Courage, and you know, it was a great attraction. Kate Stimpson, for example, who’s quite a well-known feminist… She used to come in quite regularly. I loved her for this. She would bring in visiting dignitaries from all around the country, or from the world.”

“So, anyway, we were an immediate success. We really were an immediate success. We were reviewed by New York Magazine, by the New York Times…, by the Village Voice. And the people who would come to us on a regular basis were, well, Susan Brownmiller who became a very good friend of mine. And Kate Millett would come and play chess. We didn’t discourage people from sitting around for hours, especially a woman like Kate, who was an attraction, you know. And Jill Johnston would come in with her little entourage all the time. So it was a very exciting place to be.”

And that was the sign we saw that snowy winter night, E. and me.

At that point they were able to sell – and Mother Courage became The Black Sheep, a French-Italian bistro. Then the Black Sheep became Móno, an American brasserie. And Móno became Wallsé, a place where you are supposed to experience Austrian cuisine and gemütlichkeit. It was still there, last time I checked. It is still there, according to Google maps.