Americans’ Flag Obsession Is Not So Exceptional 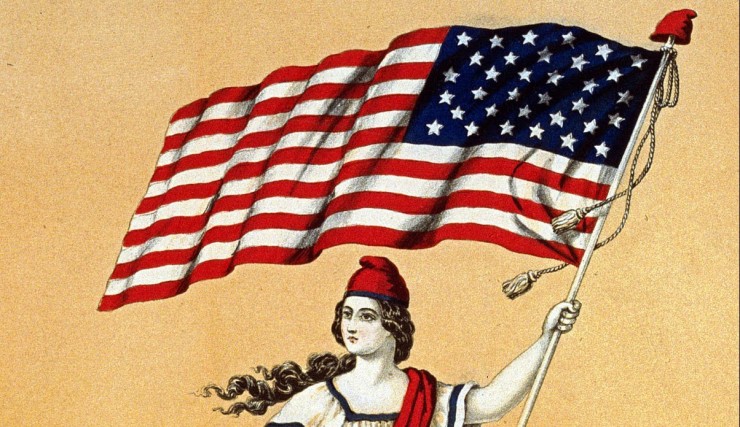 On the very first day I set foot in the United States as a young student from Europe too many years ago, I accidentally mistook a renowned fast food restaurant for the local post office. Why the silly mistake? Because of the national flag flying in front of it. I thought it was the official building I was looking for, not a commercial joint.

It seemed the Stars and Stripes were everywhere, enjoying an extraordinary status in American public culture and in Americans’ private lives. But even if some of the flags flying over car dealerships across the United States are impressively large—as is the number of U.S. politicians wearing flag pins on their lapels— Americans should resist the temptation to chalk up their love of the national symbol to some wonderful “only in America” exceptionalism.

People across Europe also have a passionate relationship with their flying colors, even if they are less conscious of it, and don’t normally fly the flag at fast food joints. Think back to the dramatic Mohammed cartoon controversy of 2006, when Danish flags joined American flags in flag-burning rallies across the Muslim world after a Danish newspaper published a cartoon depicting the prophet. Danes reacted with shock and sorrow because, they said, the national colors (depicting an off-center white cross on a red background) are to them a sacred and beloved object, a banner of joy and tolerance, of solidarity and community.

Newspaper accounts pointed out that in Denmark, the flag—affectionately called the Dannebrog or “Danish cloth” in ancient Danish—is everywhere. It flies on public buildings and churches to celebrate local and national holidays, including Denmark’s Flag Day—on June 15. It is hoisted over private homes to mark occasions like weddings and funerals, anniversaries and graduations, or just plain fine weather. It is printed on gift-wrapping paper. It decorates birthday cakes and Christmas trees.

Throughout Scandinavia, the flags of Norway, Sweden, and Finland are revered and domesticated broadly; they are considered people’s flags, not state’s flags. Their use is so pervasive that nobody notices it anymore, and those asked about it react with a “Do we really do that?” like the two young fish in David Foster Wallace’s parable who wonder “What the hell is water?” Indeed, Scandinavians might even be tempted to think their flag fetishism is a sign of Nordic exceptionalism – at least until they try finding a post office in America.

And consider Great Britain. The venerable Union Jack has joined the nouveau riche Stars and Stripes in its association with unabashed merchandising. It seems that to Britons, much like to Americans, commercialism does not pollute the sanctity of the national symbol or one’s underlying patriotism. Branding the flag in unexpected, often crassly commercial setting and products, is instead deemed evidence of a more democratic, accessible, and friendly nationalism—one curated by people, not an aloof state.

Since the 1950s, the Union Jack has been enthusiastically stamped on goods and shopping venues, perhaps in celebration of the nation’s survival of so many trials to become a peaceful and affluent society. Later on, the Union Jack became the selling symbol of British cool, a design icon in posters, mugs, tourist souvenirs, record cover sleeves, cars, sneakers, garments – like the notorious Union Jack underwear.

In France, the national flag is venerated by the state and citizens alike  as a powerful republican symbol, the product, like the American flag, of one of the great revolutions of the transatlantic world. Like the Stars and Stripes, and perhaps in competition with the Stars and Stripes, le drapeau tricolore is supposed to represent liberté, egalité, fraternité.

The French and American flags share an often-overlooked commonality. Along with the red flag, a transnational banner of social protest before being adopted by a variety of socialist states, they belong to the minority of Western flags born republican and secular. There is no monarchical or imperial center to their design. And there are no religious symbols: in contrast to the Christian crosses on the Nordic flags, conceived centuries ago as crusading ensigns.

Of course, both French and American flags and their historical spin-offs (like the Italian tricolore) have been absorbed over time into national civic religions, despite their secular origins. In democratic, secular republics, the flag acquires an even greater, near-sacred, civic importance, if anything, in the absence of other public binding icons, like king or God.  Hence the need to pledge allegiance to the flag, and to develop rites around the proper use and treatment of the sacred cloth in public and private settings; hence the impassioned debates over flag-burning in the United States.

In Europe, the first flag days were established around the same time as the U.S. Flag Day, in the 1910s: usually in June, a time of traditional summer festivals. The latest have been created since the 1990s, in Russia, Romania and Poland, in Sweden (revived to become a bank holiday) and in my own country, Italy, on January 7. Globalization and immigration-related anxieties over national identities and, in former Communist countries, the desire to advertise new flags and new loyalties, seem to account for these late revivals.

And it feels like flag day anytime international soccer matches are played across Europe, and the flags come unfurled.

There is, of course, our shared continental flag, the flag of the European Union. This official emblem somewhat recalls the flag flown by George Washington’s Continental Army (a circle of 12 yellow stars on a blue background), and has its own day (May 9). But it attracts little passionate attachment—at least in the nations entitled to fly it. The EU flag seems to conjure up more excitement as an aspirational symbol, among those outside the Union seeking to join a community they associate with prosperity and democracy.